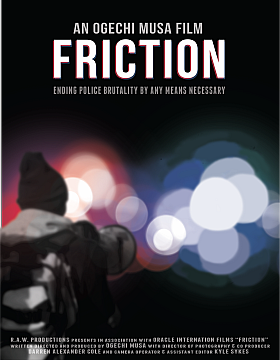 FRICTION is a dramatic imagining of the rise (and fall) of the Friction Movement, an independent, nationwide organization formed to address systemic racism and police brutality. When an enigmatic local Friction Movement leader Marco Ortiz, decides that pacifism is not going to bring about change, he leads his followers on a path of potential destruction. Marco turns to Elle, a resistor and collaborator who's no-nonsense, yet caring attitude makes her the perfect ally. When a violent confrontation with the police results in another death that hits too close to home for Elle, it upends all rationale. Marco’s pursuits eventually becomes muddled – is this justice or revenge?