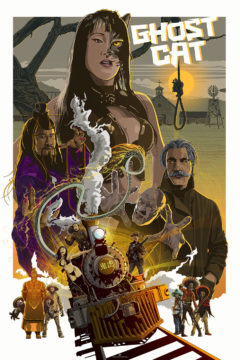 Ghost Cat : an Asian spirit endowed with powers to transform into various creature forms and sent by Daguey, a Eastern myth being to find lost treasure in an American railroad town called Tombstone Junction. She teams up with a Ranger and a hulk like monster after beating each other up, they are aided by Christopher, a Supreme figure who lead them to victory and find redemption instead of vengeance.