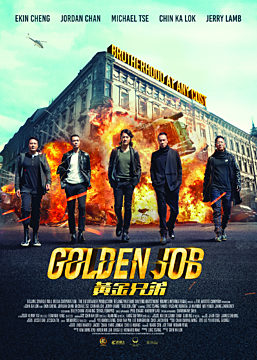 Five years ago, a group of mercenaries disbanded after failing to protect a tech tycoon from assassination. The team, led by Commander Rice, consisted of team leader Lion (Ekin Cheng), explosives expert Crater (Jordan Chan), intelligence officer Bill (Michael Tse), getaway driver Calm (Chin Ka-lok), and computer hacker Mouse (Jerry Lamb). Lion is now a modern-day Robin Hood, stealing medicine to supply the refugee camp where Dr. Chow works. But a life-saving drug is held by an Intelligence Agency. Lion reunites his team in Budapest to challenge to stage the heist-of-all-heists. They are joined by Cho Sir, their long-time mentor, and his daughter Lulu. The Intelligence Agency will transport the medicine under the protection of Rice and his new mercenary team. The reunited team create a gridlocked traffic jam in Budapest that forces the van carrying the medicine into a tunnel, where they can intercept it out of sight of the Intelligence Agency's eyes in the sky. But the van contains gold, not medicine! Bill tricked them into staging a heist of stolen Intelligence Agency gold in collusion with Rice, who arrives with his mercenaries to wipe them out! The team escapes on the motorway in a thrilling car chase; Lion sacrifices himself as a decoy, getting arrested and sentenced to a year in prison. Bill kills Rice and flees with the gold. A year later, the four remaining team members track down Bill and his mercenaries at an auto show, stealing fast cars for a chase through the streets in Japan. But Bill escapes, kidnapping Lulu to his fortress home in Montenegro on an artificial island...