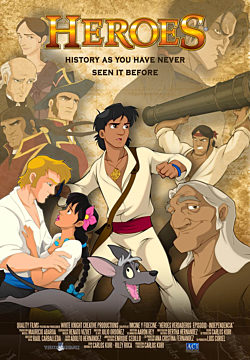 5 Heroes set out to fight for the nation they love and are soon caught up in a powerful movement of passion, love and independence. 5 Young men in search of a solution to their own personal problems participate in a movement that will resolve more than their individual needs, but those of their country men as well. Joining Miguel Hidalgo and Jose Maria Morelos, our 5 heroes enlist as soldiers for the Mexican Independence War and find themselves as part of an unstoppable movement where hope and courage come together to achieve the most important goal that not one of our 5 heroes ever dreamt of: The Construction of an Independent Mexico. Heroes is an epic adventure packed with action, passion and glory.