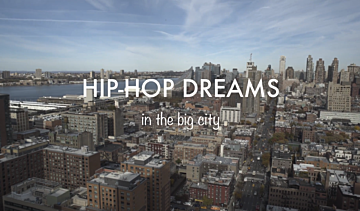 In the year 1986 Dutch filmmaker and music­ journalist Bram van Splunteren captured the burgeoning New York hip hop scene in a 40 minute documentary, that in recent years has acquired a legendary status.

30 years later we return to New York, with the 1986 film under our arm, like an old painting, to record what has changed in the New York hip-hop scene, and in the city itself, it's boroughs and streets.

With the same analytical and respectful eye and music-loving ear, we will meet the hip-hop coming from New York today. Can the city still lay claim to the title of the hip-hop capital of the world, as Time Out magazine did in 2013? Or have other cities, like Atlanta, taken over the #1 spot from New York?