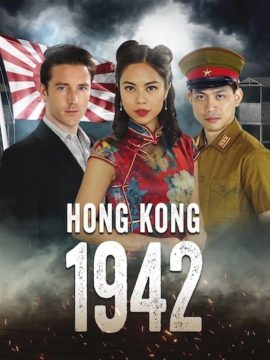 In 1942, Hong Kong is under Japanese occupation. But unbeknownst to the Japanese, British agents are operating inside the city. Ling (Franchesca Wong), a beautiful Chinese dancer who works at the Pearl Club is part of the resistance. For Ling, it’s personal, as her brother Covin (Monty Lo) is being held prisoner inside a POW camp. Covin is dying and desperately needs penicillin to save his life. Charles (Alex Pychtin), posing as a Swedish national, has set up a clandestine smuggling operation to help funnel food and medicine to the allied prisoners. Unfortunately, a run-in with Norimoto (Siu-Hay Yip), the Japanese camp commander, arouses suspicions about Charles's activities. When Ling gets injured on a mission to Cheung Chau, a bond starts to form between Charles and Ling. But the Kenpeitai (Military Police Corps) investigation turns up the heat as their illicit operations start to unravel. Ling feels trapped, as escaping from Hong Kong means leaving her brother behind. For love, for a future, a price for freedom will have to be paid.