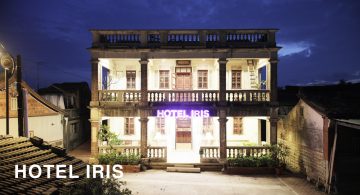 Somewhere on the coast of Taiwan is Hotel Iris, a mouldering seaside establishment run by a cold and thrifty Japanese woman (Nahana) and her lonely half-Taiwanese daughter Mari (Lucia). One night, Mari hears the cries of a woman from the upper floors. Heading up to investigate, she witnesses a distraught woman in a red camisole dress escape an impeccably dressed but violent man (NAGASE Masatoshi) whose cold voice is entrancing. Mari’s initial shock turns into a strange fascination which drives her to follow the man to discover more about him. He is a translator who lives on an isolated island one can only reach by boat and rumours swirl around him and recent murders. The closer she gets to the man, the more a hidden layer of Mari’s personality awakens as she allows herself to be engulfed by his strange passions…