Home / Films / I Love You Shelly Weintraub: 31 Scenes from a Women's Life 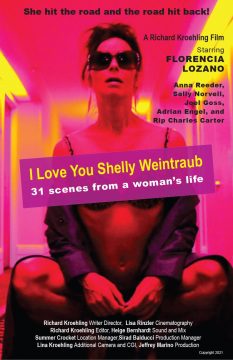 I Love You Shelly Weintraub: 31 Scenes from a Women's Life

I LOVE YOU SHELLY WEINTRAUB

A woman hits the road. The road hits back.

I LOVE YOU SHELLY WEINTRAUB begins with a long unbroken tracking shot of a middle-aged woman walking alone to an anonymous room suspended high above a modern jetport. Her hotel room window overlooks a runway where travelers come and go. We hear the dull roar of jetliners taking off and landing. She presses her hands against the glass and collapses.

Florencia Lozano (Netflix’s Narcos, Breath) plays Ana, a woman who...one recent Sunday morning while cooking her husband French toast, impulsively jumps out the window, and goes on a joyride to nowhere. Open to whatever comes her way, everything does. Bad men. Money problems. Impulsive behavior. Drinking and smoking in random hotel rooms with thin walls, Ana walks the razor’s edge between self-creation and self-destruction, and for a while it’s exhilarating.

She stumbles upon an old YouTube standup performance of comedian Shelly Weintraub, played by Sally Norvell (Paris, Texas) and becomes obsessed with the famed iconic comedian. Weintraub, a female Lenny Bruce, infamous for her raunchy, over the top sex-based humor, disappeared years ago at the height of her fame after committing career suicide on prime-time TV. Ana decides that Weintraub is her missing other half and that holds an important clue to her life’s reinvention. On a mission to find the enigmatic star, Ana obsessively preps her own stand-up comedy styled after Weintraub’s.

Ana fights to convince best friend Flor, played by Ana Reeder (No Country for Old Men), to accompany her on the journey to find the fallen celeb. Meanwhile sidekick Flor worries that her old friend has become delusional. They soon find themselves on a wild romp together and having an impossible time finding the elusive comedian Weintraub. All the while Ana’s husband has hired an investigator to find her, and he is hot on her trail. Once found, Weintraub, no longer the mad diva of radical comedy, but instead an aged paranoid woman forced to confront her own legacy, refuses to be the answer to Ana’s dream. Undeterred, our heroine continues her relentless pursuit of fame and meaning, no matter where it takes her.

I LOVE YOU SHELLY WEINTRAUB, “31 Scenes From A Woman’s Life” presents a middle-aged woman on a journey of liberation and excavation. It is an exuberant, stylish film with a unique, episodic approach to storytelling that bends some of the rules of movie making while refusing to sacrifice its ability to entertain. It is a road movie, a black comedy, and a one-of-a-kind study of a courageous woman searching for meaning. Caught between self-destruction and self-creation, we get a rare look into a contemporary woman’s struggle to discover who she is and why the hell she’s here, with an astonishing performance from Florencia Lozano.

Lensed by the celebrated Sundance Indie Spirit award-winning cinematographer Lisa Rinzler (POLLOCK, DEAD PRESIDENTS), music by iconic German composer Pere Raben (BERLIN ALEXANDERPLATZ, THE MARRIAGE OF MARIA BRAUN), written, directed, and edited by Richard Kroehling (ALBERT EINSTEIN: HOW I SEE THE WORLD, 2B, CONFESSIONS, WORLD WITHOUT END). He has directed over 70 hours of award-winning crime television and is a two-time Emmy winner.