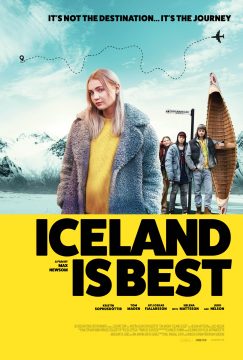 Based on actual events. Sigga, 17, tells her parents she is leaving her beautiful Icelandic fishing village to become a poet. In California. Her grandpa has just given her enough money to buy a plane ticket. Her parents are shocked. ‘Sigga’, they tell her, ‘Iceland is best’. But Sigga has a dream.

It is going to be simple. She just has to go to the airport and leave. What can possibly go wrong? Her three childhood friends, Kati, Benni and Gunni, don’t want her to go. They offer to drive Sigga to the airport but pick up Nikki, a very good-looking stranger. He has just come back from California. He likes Sigga and wants her to stay. He invites her to a party. She says she will not go. He steals her suitcase. Sigga is furious. She goes to a disastrous poetry class then to the party. Her drink is spiked and wakes up back in her village, brought home by her friends.

A little in love, she heads straight back, via a second try at the poetry class. Nikki interrupts with a poem he has composed for her and asks her to be in a friend’s film. Under pressure from her friends Sigga agrees but at the party sees Nikki with another girl. Broken-hearted, she returns home. Nikki follows. He asks her to marry him. Sigga resists and heads to the airport. Her friends and Nikki come with her. All Sigga now has to do is get through the security gate. Will she succeed or will Nikki stop her from fulfilling her dream?