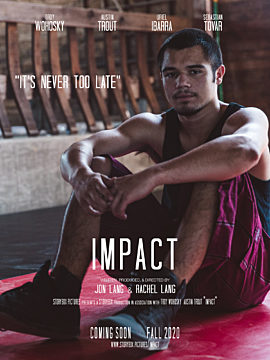 Troy Wohosky was on his way to being one of the best boxers in the world. His gang affiliation changed his life, took his boxing career from him, and nearly saw him in prison. After turning his life around, starting a non-profit boxing gym for at-risk youth, Troy has taken kids off the streets and is turning them into champions, and giving them hope for a better future.

Troy Wohosky was Oregon’s best boxer, a Jr Olympic champion, and 2008 Olympic hopeful. At the age of 14 he became a father, dropped out of school, and dove deeper into his gang affiliation. On a hot summer night in Southern Oregon, Troy and a few friends were chilling in their car, when a large group from a rival gang jumped them.

One friend was ripped from their car through a window by savage attackers, Troy was forced to either run, or stay and most likely not live another few minutes. A gang member stood in front of his car with a gun pointed at him and Troy immediately forgot about his boxing career, his Olympic dreams, his wife, his son, and he hit the gas in a desperate attempt to survive.

“As I drove away, I heard yelling and screams like someone had just died…I looked in my rear view mirror and saw the mob close in on my friend as the light faded.” When Troy arrived back in Medford half the police force was waiting for him. His boxing dreams were over.

When Troy Wohosky was a child, a volcano and cataclysmic hurricane forced his family to flee the Philippines. They moved to America and tried to start over. Troy was immediately flung into a culture, and language he did not know or understand. His parents were rarely around, and when they were, they usually weren’t sober.

Aggression marked Troy’s childhood, getting him into more fights than he could remember. A neighbor found him in the alley fighting two much older boys, and Troy was winning. He thought he was in trouble, but the man asked him to come to the local boxing gym to see if he could channel that rage.

Troy quickly fell in love with the sport, and he began winning, everything. Bulldog Boxing went from an afternoon workout in the back warehouse of a furniture business, to a brand name on the west coast. The Pedrojetti family who owned the furniture store and started the boxing club had a deep passion for boxing, self-discipline, and getting kids off the street. Joe Pedrojetti was a two-time collegiate national champ, and he and his son Jimmy toured these kids up and down that west coast until they were banging at the Jr Olympic doors.

Fast forward. The Pedrojetti’s had closed the club for personal matters, Troy was released from jail, and was completely on his own, but he still had two kids to feed and a burning desire to box. He started training in his carport in South Medford and slowly others started showing up.

Finding his rhythm was near impossible, but quitting the gang was even harder. Troy felt he was cutting out a piece of his own body, but it had to be done. What helped the most was when a few young kids found Troy and needed a coach, but more importantly, needed a mentor.

After a few bad pro fights Troy shouldn’t have taken, he positioned himself as a coach, but needed a lot of help financially to get a real gym. He met a few key people in his community and before he knew it he had responsibly fundraised over $100k, leased a building in the heart of West Medford, the roughest part of town, and started getting kids off the street, and into the ring. Troy now has the support of the Medford Rotary Club, the West Family Foundation, the Medford Gang Prevention Task Force, and the hearts of the entire community.

Troy now has one of the most competitive gyms in Oregon and has a few up and coming Jr Olympians, one that has his sights set on Troy’s childhood goals!