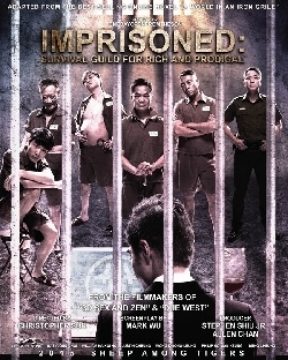 This is a story in jail. A story about learning a "new life”…

Richard Yu, a typical fop, hits a passer-by when drink-driving and is sentenced to one year in jail.

Contrary to what the outside world believes, life behind bars is not full of atrocity. Much to his surprise, it is a secluded world of its kind. This world has its own rules the survival tip from his cellmate Uncle Tat says it all, “give way, and get a way.” As one learns the rules of survival, one can pass his time peacefully in jail.

Uncle Tat teaches Richard many survival tactics, which helps him get by pretty well. Another friend Wu also watches over him, but Wu commits suicide before his release. Much to Richard’s grief, it is rumoured that the insult of his daughter in the outside world induces Wu’s death. The prime suspect in Richard’s mind is the newly transferred cellmate Jack. He’s not only against Richard in all aspects but also acts like a tyrant in jail, even the cell bosses Seatto and Coyote are somewhat fearful of him.

His half a year jail life allows Richard to realise his shortcomings in the past, disappointing his loving mother and is ungrateful to Mayo, his girlfriend of four years. Richard promises Mayo to reform himself, and marry her upon his release.

But Richard cracks up when Uncle Tat falls down the stairs from Laundry Room resulting in a coma. He believes the accident and the death of Wu are plotted by Jack, who is determined to exterminate him and those close to him. His repression accumulated over the months causes his break out, and Richard rushes into the Laundry Room to beat up Jack, but is subdued and his sentence increased. Being in the punishment cell for a month, Richard breaks down and is at the edge of insanity.

The growth of Jack’s power and setback of both friendship and relationship cause Richard’s tolerance to skyrocket and fights against Jack, who is doubled his size, in the cafeteria. They are both severely injured and almost meet their death.

After experiencing a series of events, Richard's release date finally comes. He is like a baby being reborn to this world, learning to live a new life.