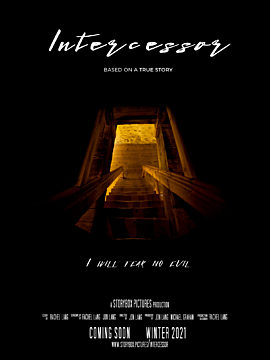 A girl trapped in a cult tries to rescue her siblings from their abusive father before they all lose contact with the outside world, but when her brother is diagnosed with insanity, she begins to question her entire reality.

Intercessor gives people a first-hand look into some of the most silent crimes in America. This true story takes you deep into an American cult rampant with domestic violence and spiritual, sexual and psychological abuse.

Intercessor explores the deep fears that lay submerged within us all and what is possible when they go unchecked.

The message is one of empowerment and never giving up hope. What Sarah discovers amidst unlikely circumstances will lead her and all her siblings to freedom.

Hidden deep in the woods, Sarah and her community prepare for a catastrophic economic collapse.

Sarah is a young adult living at home with a complicated blended family of 10 children. Intended for protection, the community standards are harsh and abusive, demanding absolute adherence to an ideal of perfection in order to survive the future catastrophe.

Guns, religion, purity, conspiracy and male dominance are the norm.

When Sarah’s biological mother reappears, ordering a court hearing to see her children, Sarah’s father Robert is caught between pleasing the community or the courts, and suddenly a brief window of communication with the outside world is opened.

In an effort to understand a disturbing nightmare, Sarah reaches out to her brother, Ben, who deserted the family and he reveals their father’s dark methods of punishment for those who question his ideals.

Sarah begins receiving dreams and visions that come to pass as she secretly pushes her siblings to escape with the family social worker before the last visitation. Sarah almost succeeds but her younger brother’s misdiagnosis of multiple mental disorders gains Robert traction.

Robert catches wind that Sarah is questioning the community values and Sarah, now unsure of her own sanity, must redefine her entire reality while the fate of her siblings hangs on the line.

Sarah chooses Ben’s side and helps her siblings escape, but just as she gets the last children out, Robert realizes Sarah’s deviance and traps her at home, cutting her off from the outside world.

Robert demands Sarah repent or be dragged before the community and confess her sins.

As Sarah’s last resort, she embraces her supposed insanity like a superpower. All her dreams and visions become clear as she finally understands the Holy Spirit for the first time. Locked in the basement for three months with a bible, she prays to God to connect her with her mother again, who lives 800 miles away. Two days later, her mother shows up at her doorstep and rescues her from the cult.