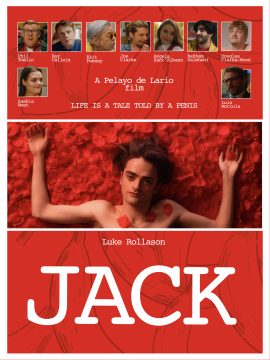 Jack is Charlie's penis, and he is the brains of the operation; he and Charlie have been friends from birth. When Charlie meets Barbie Le Fleur, a Canadian transfer student, Jack will do everything he can to guide his friend in his quest to enchant his dream girl. With the help of an odd group of characters, from an incredibly handsome School therapist to a sex advisor prostitute and a group of hormonal friends, Charlie will use his "brain" to get the girl of his dreams.

JACK has been nominated to 12 film festivals and won 6 awards, with big-name festivals like the Salerno International Film Festival and the Paris Art and Movie Awards among them.