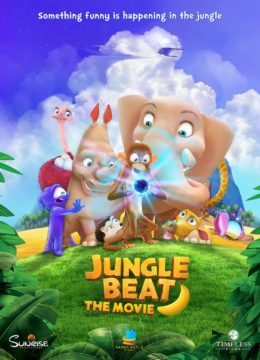 The Jungle Beat animals think it’s the best thing ever when an alien arrives in the jungle bringing with him the power of speech. They also surprisingly think it’s the best thing ever when they find out that he’s been sent to conquer them. What follows is a delightfully fun and heart-warming story of friendship, acceptance and optimism where we finally find out who’s really conquering who.

Jungle Beat: The Movie tells the story of a little alien who has begrudgingly been sent to Earth to conquer the planet. His presence causes great excitement among the animals as, with his arrival, they have all gained the power of speech, thanks to the special speech pod that he carries.

The alien, Fneep, is surprised at the animals' hospitality, and is even more surprised when, even after Frog eats his laser gun and swims away, the animals happily surrender to him and congratulate him on taking over his first planet.

The story then follows the animals as they try to help Fneep get home. What they don't know is that the final part of Fneep’s mission is to capture them all and take them back to his home planet. But what they also don't know is that their genuine, heartfelt acceptance of him and their unwavering desire to see him succeed is winning his heart over to the point where he relinquishes claim to the planet and chooses to return to his people in shame rather than capture his friends.

The alien leader, Grogon, has other ideas however, and he decides to take over the planet himself. Fneep steps in before the animals need to defend themselves and wins Grogon over with the most powerful weapon Fneep has ever encountered… a hug.

It seems the aliens have never truly known what it feels to be loved and accepted for who they are and have tried to find value and worth through conquering other planets. It turns out all they needed was to feel special!