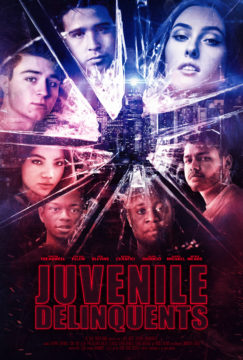 Broken teens facing incarceration for a crime they were forced to commit decide not to accept their destitute destiny and go about making a new one by forcing redemption onto bad people. The Juvenile Delinquents (JD’s) form a new dysfunctional family as they maneuver around problems manifesting from their youth, competitiveness, irrationality and the gruesomeness of their new lives.

**10,000 Actors applied for this teen ensemble, these are the best unearthed teen actors in the USA**

Pedophile Frank (Jay Amari) meets a gruesome demise during the botched rescue of Sarah (Corynn Treadwell) after she is unexpectedly dragged into his house. With the male contingent of the marauding minors posse just released from Juvenile Detention, the seven teens are faced with the dilemma of dialing in for medical help or leaving Frank to die. Doing more than just choosing the latter, each teen bar Ryker (Moses Meads) enters into the unique pact proposed by Danny (Phil Blevins) albeit Lin (Silvia Dionicio) has the greatest difficulty with the price of membership.

As the teens prepare to torch the house, Frank’s wife Molly (Marie Smalley) arrives home, and is soon kept hostage, but after learning of her husband’s vile history she replaces hate with hope.

Back on the streets, brothers Nick (Cha-tah Ellem) and Marko (Kaleal Cerafici) are quickly dragged back into a perilous life with Ryker. Danny befriends black sheep Chris (Xavier Michael) and tries to keep him out of harm’s way, as the girls react very differently to what has gone on but remain unified. With incarceration looming, the teens reunite as factions form thick and fast. The group eventually fractures during a power coup which results in further atrocity. Rather than split, this mistake becomes the catalyst for the teens to become a forged family. Order, or the illusion of control then sees Danny set the teens onto a new path toward redemption.