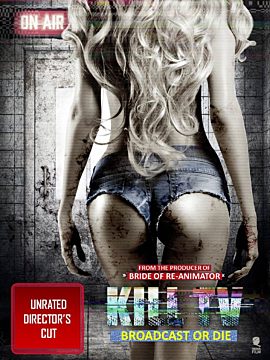 Ten years after a series of unsolved serial killings, a determined journalist cracks the case and prepares an expose for air the following week, all the while keeping his secret that the twisted killer now works in his own stations.

As he covertly prepares, a skeleton crew of the local TV stations begins to air their live, late-night horror show, featuring a ghoulish host named Dr. Perseco. Unbeknownst to all, one crew member has already been viciously murdered and her body hidden. A violent thunderstorm rolls in as two more of the crew and the journalist disappear.

The TV show continues with over-the-top macabre antics and Perseco’s dark humor until the mutilated body of one of the missing is discovered. The midnight crew is now in a full panic and frantically tries to escape the building, only to find all lines of escape and communication sabotaged. They are trapped inside with the killer somewhere in the station! Thunder strikes and the lights go off, leaving only emergency power available, and one hope for rescue; they must broadcast or die. They plea for help on the air, but the plan falls on deaf ears when viewers believe it’s just a hoax. No help is coming. Soon, more lifeless, brutally slain bodies turn up and the pressure mounts to identify the killer before another is found slaughtered. As the mystery begins to unravel, it becomes clear that the killer is among them. Friends and colleagues begin distrusting each other, and with every step inching ever closer to discovering the killer, another body falls.