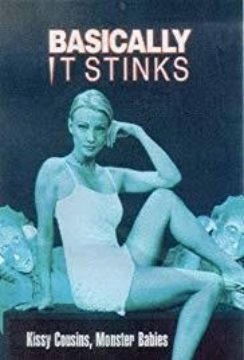 Edited version of the multi-award winning feature, THE HISTORY OF EVERYTHING CIRCA 1993 To the Present F/K/A Kissy Cousins Monster Babies and Morphing Elvis

Two Hollywood Producers try to save their dying careers by creating a blockbuster out of old movies and their warped imaginations. What they don't know is that they are being mined for their creative ideas. The film was in production for 25 years and shot in seven states including Wash D.C. (Linklater eat your heart out!). Homages galore! The next Rocky Horror!

It’s circa mid-1990s – the fantasmagoric era when anything may go and it ultimately did. In the days when Spielberg’s dinosaurs ruled the cineplexes and Japan overtook America’s movie studios, you’ll come face-to-face with the madcap Peter Grover and John Potters, a frustrated duo of Hollywood producers who’ve hit it big and are expected to do so again – and soon. Their current assignment from the studio boss is to develop a brilliantly boffo box office smash by the end of the day or face the consequences – they’ll be swimming with the fishes by sundown. In a desperate attempt to save both their fading careers as well as their lives, they put their addled brains together to find inspiration for a blockbuster film script – a task they’ve never done before.

In a wild, wacky, warped voyage through the history of celluloid magic, including a visit from the infamous Sharon Stain, they draw piece by piece from old movies, pop culture, and sudden and altogether unexpected bursts of creativity from deep within their twisted imaginations. Their creativity knows no bounds and neither does this film.

Fasten your seatbelts, for a wacky game of silver screen Trivial Pursuit in an homage-filled, riotous ride through the 90s and beyond. This satirical look at the movie-making process detours left, right and slantways with sidebars and segues into politics and social mores.

And what ultimately happens to these zany producers, you may ask? Hold on to your hats because we whoosh ahead 26 years like a time machine trip – and we mean trip! Their fate is in the hands of The Big D, the man behind the mask – and it’s the kind of surprise you surely won’t be expecting!

Be ready to wiggle your hips like Elvis and dance The Jurassic – all we’ve got to say is Rocky Horror eat your heart out!