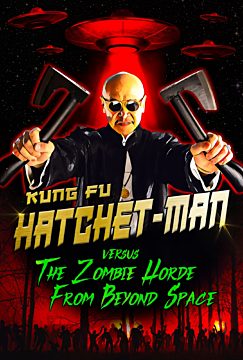 Kung Fu Hatchet-man versus the Zombie Horde From Beyond Space

A fleet of Alien flying saucers use a strange red beam to hypnotize and transform their victims into mindless undead thralls. Unaffected by the crimson light, a blind Martial Arts master uses his other senses and his elite Kung Fu skills to fight off the mindless horde!

JAMES LEW (Big Trouble in little China) stars as the the blind Kung Fu Hatchet-Man in this throwback film that has the feel of a 1950's horror film combined with the stylistic dynamics of a 70's Kung Fu film.

James is also known for his 2016 Emmy win for Best stunt Coordination for the Netflix/Marvel series Luke Cage and he will bring this same energy to creating the action for Kung Fu Hatchet-Man!

This film is currently in development with plans to start shooting in late 2021 or early 2022.