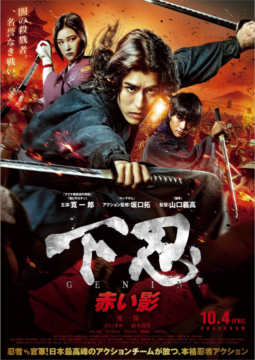 In the final days of the Tokugawa shogunate, the Battle of Toba-Fushimi. This was sparked by one ninja….
In the last days of the Tokugawa shogunate, the era in which the samurai rule is about to end. Those who were called ninja, had become obsolete. Ryu (Kanichiro) is a descendant of the ‘Genin’, which is the lowest level in a ninja clan, but is now become a fugitive ninja living in Edo. One day, Kaishu Katsu (Kanji Tsuda) discovers Ryu’s origin, scouts him and assigns him a secret mission. The mission is, ‘To recapture Shizu (Mayu Yamaguchi) - princess of the Satsuma Domain who is to be wed in Edo, and send her back to her Domain.’ Soon, Sho (Kousei Yuki) - a mysterious practitioner of Ryukyu martial arts is dispatched as a pursuer from the Satsuma Domain.