Home / Films / LAST OF THE WOLVES 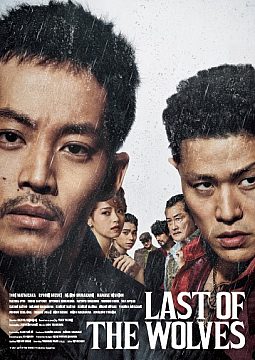 LAST OF THE WOLVES

The year is 1991. Three years have passed since the savage war that pitted the Kurehara City-based Odani-gumi gang against the prefecture’s most powerful criminal organization, the Hiroshima Jinsei-kai. Relations between them have now reached a certain degree of stability. The man who pulled strings behind the scenes to end the conflict, Kurehara East Police anti-gang detective Shuichi Hioka. He has sent his devoted young protege Kota Chikada, nicknamed Chinta, to infiltrate the Hiroshima Jinsei-kai as his spy, and is also romantically involved with Chinta’s older sister, Mao.

However, the fragile and short-lived peace begins to crumble after the release from prison of a certain individual: Shigehiro Uebayashi, a soldier loyal to Irako-kai boss who was murdered by Odani-gumi lieutenant Ichinose in the conflict three years earlier. His first course of action is to savagely murder the younger sister of a prison guard. Hiroshima Prefectural Police suspect Irako-kai involvement in the killing, and request Hioka’s help in investigating it. It soon brings him face to face with Uebayashi. The gangster vows revenge against the young cop who conspired to have his “old man” taken out. The Hiroshima Jinsei-kai and Irako-kai focus their energies on business, and disgusted Uebayashi unleashes his demonic brutality upon them, dealing out his own brand of gruesome punishment.

Meanwhile, newspaper reporter Takasaka digs up dirt on Hioka and exposes his involvement in the events of three years ago to the public, putting him a difficult situation.

Uebayashi ends up establishing his own gang, the Uebayashi-gumi. Eventually, war breaks out between them and the Odani-gumi, and Hioka is forced to work desperately to end the hostilities. Uebayashi lays waste to all in his path as he imposes his might. To make matters worse, he leads his underling Chinta down a dark path toward his own destruction. As all are pushed to their ultimate limit, the situation takes yet another turn for the worse...