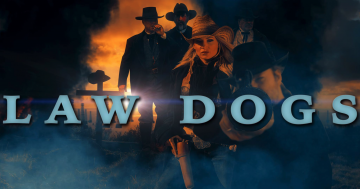 LAW DOGS is a western feature film set in 1908. LAW DOGS is a modern mix of Bruce Willis's RED, Chris Pratt's THE MAGNIFICENT SEVEN, and Sharon Stone’s THE QUICK AND THE DEAD. When oil is discovered in the small town of Plainview, Oklahoma, Naomi, daughter of a murdered US Marshal, teams up with her father's LAW DOGS to stop a greedy oil barren and a corrupt governor from destroying the town. After the LAW DOGS put an end to the governor's land grab, big oil steps up their game by bringing in Joey, the notorious gunslinger, Naomi's estranged sister. The LAW DOGS realize justice and the law are sisters, but they ain't twins. When bullets start flying, can the sisters save the town, and themselves? LAW DOGS is currently in preproduction on location. Production is scheduled for April 2022, with delivery later that summer. Our team has a long track record of successful feature films and TV shows released both domestically and internationally. LAW DOGS is currently seeking sales representation and distribution.