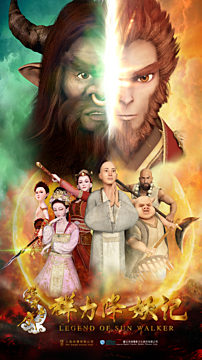 A group of people works together to defeat the enemy. This film aims to convey the message that the power of unity is far greater than individual heroism. With this belief, any difficulty can be solved.

Sun Walker, who always loved to play the hero, though he could easily borrow the plantain-fan, as advised by the old man in the village, to put out the flame of the Fiery Mountains and escort the Master through without difficulty. It was to his surprise that he learned the owners of the plantain-fan were Princess Raksasi and Bull-demon King, who had been bearing grudges against Sun since years ago when their son Red Boy failed to eat Xuanzang to become immortal. Red Boy was at that time subdued by Bodhisattva Guanyin, whom Sun Walker sought assistance from. Because of that, Princess Raksasi and Bull-demon King refused to lend the fan to Sun Walker, who was still naive enough to believe that Bull-demon King would lend him the fan for the sake of the old-time when they were sworn brothers five hundred years ago.
Unfortunately, after a few attempts and a series of struggles and fighting with Princess Raksasi and Bull-demon King, Sun Walker still failed to obtain the plantain-fan. An opportunity came up for Sun Walker when Bull-demon King had to leave for Stony Mountain Blue Lake to attend a banquet hosted by the Old Dragon. Sun stole Bull-demon King's mount Golden-eye Beast and rode it off to Cuiyun Mountains' Plantain Cave and got the plantain-fan with some trickery. Upon hearing of this trickery, Bull-demon King, to save face and his own property in Moyun Cave as well as taking revenge on Sun for his wife and son, turned himself into Pig Bajie, and tricked Sun to give him back the plantain-fan. The bull showed his true colors later and engaged in fierce fighting with Sun. They fought all the way to right in front of the Jilei Mountains' Moyun Cave, where they both transformed themselves into various beasts in a non-stoppable struggle. Sun Walker and his allies eventually lost to Bull-demon King, who was so powerful from the five hundred more years of practicing Taoist rules. Just as Sun was about to be killed, all the gods, Buddhas, and heavenly fighters came to his rescue by subduing Bull-demon King. It finally dawned on Sun Walker, who had just escaped death by a whisker, that as Bodhisattva Guanyin had previously instructed, to be able to fetch Buddhist scriptures from Leiyin Temple in the West, he cannot just play the hero; instead he must cooperate and unite with others, stay firm in convictions, set goals, and persist until the end. With the belief that "God helps those who help themselves" in mind, one can overcome any difficulty.