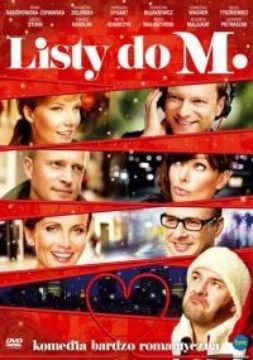 ‘Letters to Santa’ has drawn record audiences to the cinemas all over the country, attracting almost 400,000 viewers just on the opening weekend and making it the third best result in the course of the last 20 years!

Over the years women have been crying together with Bridget Jones and falling in love with Hugh Grant. Now the time has come for ‘Letters to Santa’to introduce a new dimension of romantic comedy where behind hilarious scenes there’s deeper universal truth. It is an enchanting story taking place on this special day in a year when five men and five women in their slightly tangled lives are truly finding out that there is absolutely no escape from love and… Christmas.

Mikołaj works for a popular radio station. On Christmas Eve he gets an on-air phone call from Doris, frustrated and complaining about the lack of love in her life. To cheer her up, Mikolaj tells her a beautiful story. Little do they know that this phone call is going to change their lives. Shortly after that we meet Szczepan crying in his car while his wife is cheating on him in their bedroom. Then we see Wojciech, leading a life of luxury who chats to a little girl on a petrol station. In an entertaining plot their fortunes are interlocked. We follow the unfolding events with curiosity, laugh at the coincidences that happen and are touched by their outcomes. Apart from a great scenario and fantastic cast, with loads of good humour around, the film also guarantees a very personal discovery for everyone.
Deemed to be the most romantic comedy of recent years it’s bound to keep your spirits high up all the way until Christmas!