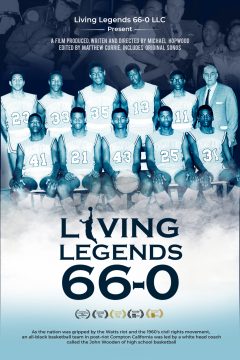 As the nation was gripped by the Watts riot and civil rights movement, An all-black basketball team in post-riot Compton, California was led by a white head coach called the John Wooden of high school basketball who transforms a team of athletes into living legends becoming the first team in California history to win 66 consecutive basketball games without a loss while becoming back-to-back undefeated State and National Champions.