Home / Films / Looking For Her 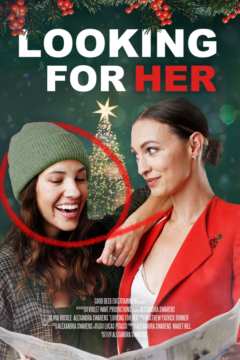 Taylor is a workaholic with not a lot going on in her social life. Olive is an aspiring actress, with little money to her name. As the holidays near, Taylor gets a call from her dad about visiting her family for Christmas and that they finally want to meet her girlfriend. She agrees, after feeling guilty about not seeing them in a long time, but there's a problem: Taylor and her girlfriend recently broke up. Not wanting her family to know that her relationship failed, Taylor considers looking for a date to hire. After a few bad dates, she decides to tell her parents the truth. But, wait, not before her coworker, unbeknownst to Taylor, puts an ad in the personals. But nobody reads those anymore, right? In a play of fate, one person accidentally stumbles upon the ad, Olive. After reading the amount of money being offered, she's determined to book this gig. As it's coming down to the wire, Taylor agrees and hires Olive. They head to her parents' house for the holidays and must convince everyone that they're in a romantic relationship and not the total strangers that they are.