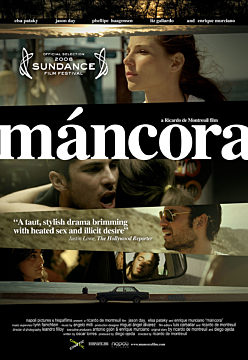 This is the second feature for Peruvian director Ricardo de Montreuil. His first feature, LA MUJER DE MI HERMANO, holds the record for the largest theatrical release for a Latin film in US history. By the same writer as VOCES INOCENTES, which was nominated in 2005 for the Best Feature Film at the Berlin Film Festival which was the biggest Mexican box-office hit that same year.

A tender and pulsating road-trip drama that delicately traces the shifting emotional boundaries between three disconnected souls. Santiago (Jason Day), a 21-year old from Lima who is haunted by his father's recent and unexpected suicide. Suffocating in the chill of a grey Lima winter, he decides to take refuge in a beach town. There, he receives an unexpected visit from his stepsister Ximena (Elsa Pataky), a vibrant, sexy Spanish photographer and her husband (Enrique Murciano), a brash art-collector from New York .