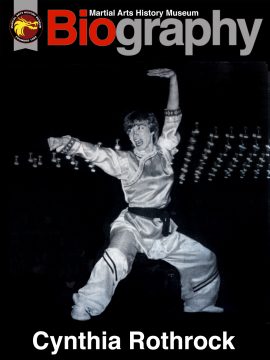 Officially named, “Queen of the Martial Arts,” Cynthia Rothrock is considered one of the most historic figures in martial arts history, or five consecutive years, she was the undefeated World Champion in the karate tournament circuit. She has graced the cover of over 60 martial arts magazines and was inducted into the prestigious Martial Arts History Museum’s Hall of Fame at its inception in 1999. In the 1980s, she became one of the biggest box office draws in both Hong Kong and America for her action films. To date, she has starred in over 60 films and was also named “Queen of the Martial Arts in Films”. She continues to be one of the greatest advocates for the martial arts conducting countless seminars throughout the world.