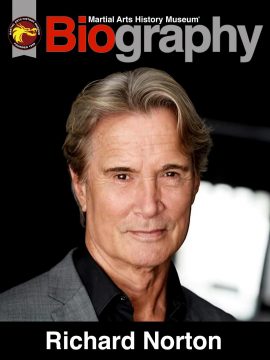 Richard Norton is recognized as one of the most notable and successful martial artists in film and television. With his powerful yet inspiring screen presence, he wins the applause of international audiences with his engaging ability to play either the hero or the villain. With a library of 70 plus films on his resume, Norton began his career as a bodyguard and then trainer to some of the most popular bands, including Fleetwood Mac, the Rolling Stones, Linda Ronstadt, ABBA, and James Taylor. Over the years, he has had several starring roles in such films as Force Five, The Octagon, the China O’Brien series, Space Rangers, Man of Blood, Under the Gun, Black Forest, the Rage and Honor Series, and more. Just a few of his stunt and fight choreography include Mad Max, The Suicide Squad, X-Men, and Walker, Texas Ranger.