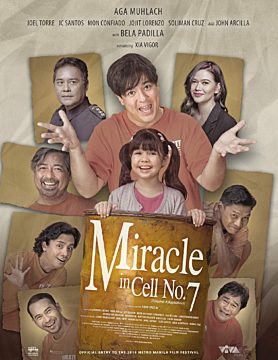 Miracle In Cell No. 7

Joselito is a mentally-ill man who is wrongfully charged with sexual assaulting and murdering a little girl. In prison, he becomes friends with his fellow inmates and together they form a plan to smuggle in his young daughter inside the cell. Year after, his daughter becomes a lawyer and is determined to prove her father's innocence.

The Filipino adaptation is the highest grossing film to-date among all the entries in the prestigious film festival in the country, Metro Manila Film Festival 2019.