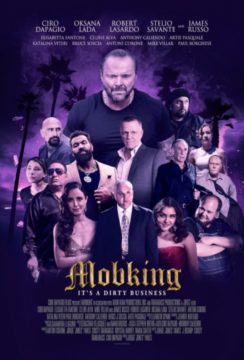 Mike White, a lifelong, loyal confidant of the notorious Sasso Crime Family of South Florida, is about to be released from prison. Assimilating back into life is top priority. That means getting back to the business of being a husband and father, and being rewarded with a seat at the Sasso family table for keeping his mouth shut and doing hard time for The Don. However, when he returns home, he quickly realizes that life back on the outside isn’t turning out the way he hoped or planned.

Carlo Sasso, The Don’s entitled and irrational son, is on a mission to get rid of Mike before The Don has a chance to open up the books and give Mike a big piece of the business. To his utter shock and disbelief, Mike is attacked by a mysterious hit man on his first night home from prison, and later learns that it was an attempt on his life sanctioned by Carlo. He has no choice but to go into hiding with his family and hope that the Organization that he’s remained devoted to all of his life will protect him from one of their own.

Now, wounded and on the run, Mike must heal and try to solve this dilemma: stay away for the safety of his family or face the organization and fight back. But he knows deep down that no matter where they are, they’re never really safe because Carlo could come at any time to finish the job. However, the family is forced to deal with unexpected outside threats including a shady drug dealer and a sexual deviant that they must deal with together as a family. It’s crystal clear to Mike. The White’s will never back down, with or without the support or sanction from the Organization.

Mike has one choice left; take the fight to Carlo. Mike, along with Vetti and Enzo hunt Carlo in his own home as Carlo tried to do to Mike. One or the other has to die tonight. And no matter what happens afterwards, all could change for the Sasso crime family.

But. In the end, it’s a dirty business. Who will emerge as MobKing remains to be seen.