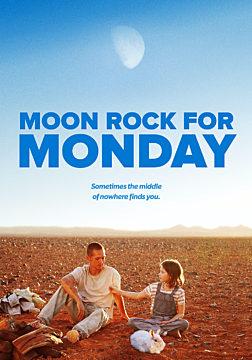 Nine-year-old Monday is home-schooled by her father Bob in Sydney. Due to her terminal illness Monday’s only contact with the outside world is her weekly visit to the hospital. Monday’s imagination is captured by the Moon Rock (Uluru) which she believes will heal her and desires to travel to the middle of Australia to find it. By a twist of fate she becomes caught up in a police chase involving sixteen-year-old Tyler, a street kid with a massive heart. Tyler uses Monday to evade the police, but despite the circumstances they soon form a friendship. They decide to go on the run and take a road trip to the Northern Territory to find the Moon Rock. Along the way they meet a bunch of outback characters, some helpful and some not so. Meanwhile, Bob is desperately trying to track his daughter down before Detective Lionell and the police - who are out for blood. It all culminates in a gripping finale set in the heart of Australia, and a heart-warming end to a touching journey of friendship.