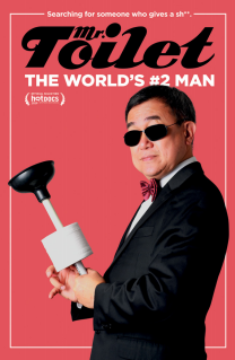 To a stranger, he’s a quirky Singaporean obsessed with toilets, but to those who know him, he’s ‘Mr. Toilet’.

A former entrepreneur, Jack Sim uses humour to campaign for something no one dares talk about: excrement. It’s a crisis that impacts 2.4 billion people worldwide. In India alone, 200,000 children die each year from lack of safe sanitation, while women are regularly raped because they must defecate in public spaces.

In this film, directed by Lily Zepeda, Sim plunges into his biggest challenge yet when asked to help implement Prime Minister Modi’s promise of turning India into a defecationfree zone. But with few resources and no real help from the government, Mr. Toilet discovers there is a price to pay for being the world’s #2 hero. A Latrine Dreams production.