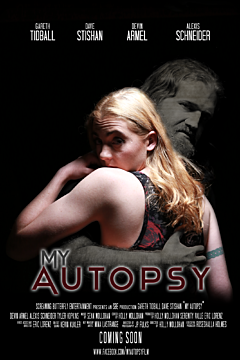 “My Autopsy” is a story of the progression of a woman's strength as she journeys to escape the invisible chains of a past abusive relationship. It is an exploration of the darker side of love and obsession, and how an emotional autopsy is sometimes necessary to fully realize our own power.

Rachel is a beautiful, yet troubled, young woman wants to love so much and so blindly that the pursuit of romance links her to intensely bad situations. She trusts too much, devotes herself too early, and seems to always find the wrong person with which to share her devotion. She has a big heart, and believes herself to be strong, yet is too naive for the harsh realities that she faces every day. She struggles to find the inner strength to not only tackle life on her own but to effectively exorcise the demons from her past. This demon is embodied in the form of Vince, her harsh and abusive ex-boyfriend. Rachel's self-doubt is perpetuated by this particularly bad relationship that refuses to let go of her life.

Vince is a very bitter, angry man in his early thirties. He is a musician who cares intensely about his reputation in the “scene” over everything else in his life. He has spent his whole life in bars trying to enhance this reputation. His great ability is seduction. He poses as a sweet guy and successfully charms the lovesick Rachel into becoming his girlfriend, just so he can use and abuse her. When Vince's true evil emerges Rachel cannot find a path of escape. Through a traumatic experience that leaves her unconscious, she escapes Vince, but even though she's physically separated from her abuser, she cannot break free from the emotional death grip that Vince has upon her mind and emotions.

The film follows Rachel as she tries to move on with her life and rekindle old friendships and build new relationships. However, it seems that the more she tries to move on, it becomes more evident of how much deeper the emotional scars are than the physical one from the relationship with Vince. Then Vince starts reminding her that she isn't her own person; she is his property. In effect, she never fully became free. Eventually, the real threat of Vince becomes real in a final showdown that pits Rachel and Vince against each other for ownership of her inner power, true self, and her life.

“My Autopsy” is not the typical dark dramatic feature. Set in the environment of the gritty local music scene, the film examines Rachels fall into the abyss and her ultimate realization of self is hard-hitting, “no holds barred” fashion. It's sex, drugs, rock and roll, and stream of consciousness poetry with a dreamlike emotional twist. It's a tale where it is discovered that within even the most broken woman hides a strong person who will eventually break out of the emotional cell in which she is imprisoned. She will find that she has the inner strength to not only tackle life on her own but to effectively exorcise the demons from her past.