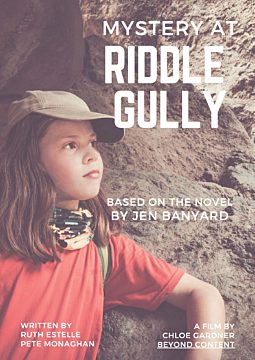 Pollo di Nozi writes and produces an online zine for the residents of Mystery Gully, but she dreams of following in her mother’s footsteps and hitting the big time as an award-winning investigative journalist. When a cadetship competition is announced, with the prize being an attachment with the major regional TV station, Pollo is rapt. This is her big chance to not only prove she is a top journo and honour the memory of her mum, but maybe get a bit of attention from her veterinarian dad who has immersed himself in work since his wife’s passing.

Enter Will Hopkins, new kid in town, whose mum has just married the local cop. Bad time for Will to be spray-painting graffiti on Council property! Striking a deal to get him out of strife, Pollo enlists Will’s help to investigate the Mayor’s shady activities, and find out what the weird guy in the long dark jacket is up to in the cemetery. Will has him pegged as a possible vampire, but Pollo thinks it’s worse: he’s a wildlife smuggler.

Pollo, Will and Pollo’s pet sheep, Berry, uncover a web of secrets in Riddle Gully and must alert the locals to their Mayor’s nefarious plans, fight a suspected vampire, save an endangered bat species, as well as learn chess and meet the deadline for the all-important cadetship.