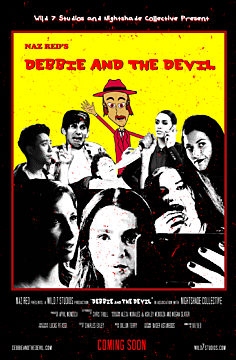 Naz Red's Debbie and The Devil

Debbie and The Devil (DATD) is a horror/comedy film featuring 3 interconnected horror stories curated by Mister Red in his magic movie theater to two shell-shocked victims of a mass shooting. Each story is told in a different horror sub-genre style.

Logline: After a “typical” school shooting, two children seek refuge in a movie theatre where they meet a nefarious theatre owner who presents the Debbie and the Devil trilogy -- three interconnected horror films.

DATD has the structure of Creepshow, the crude humor of South Park and Beavis and Butthead: Do America, the splatstic comedy of Evil Dead, and outrageous gore of Ichi the Killer.