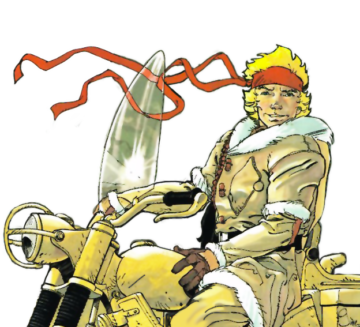 This beautiful comic created by Didier Convard and drawn by Christian Gine in 1986, tells the story of the United States of Europe that, due to a meteorological catastrophe, find themselves isolated from the rest of the world and covered in ice. In this desperate and violent universe, at the mercy of the raids of the warlords, Northman, a solitary and mysterious man and his faithful dog Trace find a dying child beside his murdered parents. Snow, as the boy will be called, without memory for the trauma, survives and becomes a teenager who will go in search of the murderer of his parents and the twel- ve keys to open the doors that isolate the United States of Europe from the rest of the world. Will Snow be able to restore freedom and a future to old and crazy Europe?