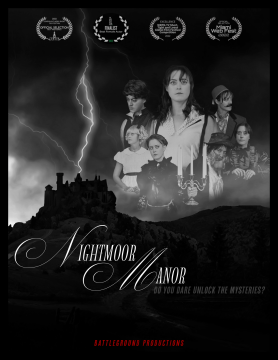 A plucky orphan turned governess. A brooding aristocrat. A forbidding housekeeper. And mysteries wrapped in secrets then bundled into conundrums. Do you dare open the door of Nightmoor Manor?

Nightmoor Manor is a limited streaming series that's an affectionate parody of Gothic romances, featuring one actor playing all roles in short episodes. The first episode of the series premiered at the 2021 Greenscreen Film Festival, and has since been selected by the 2022 Short, Tight and Loose Global Film Festival (where it won an Excellence Award), the 202 Miami Web Series Festival and the London International Web Series Festival.