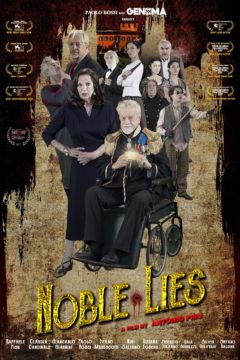 On the Bolognese hills, a family of decayed aristocrats survives its own economic decline in the only place that they have left: the estate of Villa La Quiete. They face the war and the crisis in the only way passed down by their families: by simply not caring. The Duke Pier Donato Martellini and the Duchess Romola Valli, tired and disheartened, reside in their villa with a skeleton domestic staff: a young blind gardener and a deaf butler who are both veterans; and Giovanna, a cook who is constantly angry and eternally in love. As if that weren’t enough they have to look after the son Jean-Jacques: an immature fifty-year-old who spends his days composing poems having only one recurring theme: the Bologna Footbal Club. The solution to all their troubles turns up at the villa on a ordinary afternoon: a man and two women who are on the run, ask the dukes for shelter; they are Jews, they’re called Beniamino, Anna and Stefania. They are disposed to pay one gold bar for each month of their permanence and they promise to relocate somewhere else right after the end of the war. The Duchess, after having accepted, tries anything to sedate in the bud every attempt of the domestic staff to steal the treasure of their guests and takes matters into her own hands. Hers is a simple order: do nothing, wait for the family of refugees to keep the promise and give as many gold bars as possible. This way they will allow the “decayed Martellini” to reacquire movable and immovable properties, frills, family memories, silk tablecloths, ivory brushes, collections of rocking unicorns that had to be to paw, sell or give away throughout the years. The rents follow one another, the gold bars pile up and right in the moment the Duke and the Duchess finally glipmse an aristocratic renaissance, the war ends. Terrified by the possibility of loosing their only source of income, with the help of the son and the domestic staff, they organize a series of rocambolesque gimmicks, pantomimes and subterfuges faking that the conflict has not ended yet. But one day, a man that Anna, Stefania and Beniamino know well turns up at the villa: Franco. From now on everything changes, and nothing will be as it seemed anymore.