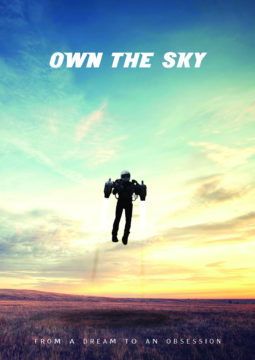 What begins as a life-long passion for Jet Packs, turns into an obsession, then addiction and finally triumph. Shot over ten years, Own The Sky chronicles David Mayman’s seemingly impossible quest to build and fly the world’s first Jet Pack around the Statue of Liberty and the impact his obsession has on his wife and children.

Growing up in Sydney suburbia, David has the same dream that many young boys of his age have – to be able to fly! His quest for speed however nearly takes his life and it’s during his recovery from a high-speed go-karting accident that he sees the opening of the 1984 LA Olympics and the famous flight of the rocket pack into the stadium. His life’s ambition is born… he is going to build and fly a Jet Pack.

He discovers that the rocket packs of his childhood were fakes. They could only fly for 25 seconds at most. What he needs is a fire breathing Jet Pack! Something that does not exist. Something he will have to build from scratch with 83-year-old engineers Nelson Tyler and Bill Suitor, the pilot who flew into the stadium. Financial problems, a horrendous accident and near-drowning in Sydney Harbour soon brings his selfish journey to heel. Recovering from skin graft
surgery and back with the family, David realises the Jet Pack could be used as a rescue vehicle, it could save lives. And the final stage of his quest has new life…