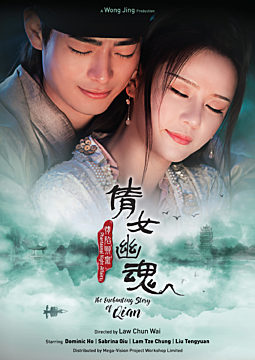 Scholar Ning (Dominic Ho) traumatized by the betrayal of his lover, is afraid of falling in love again. Depressed, he works as a “study companion” to the sons of the affluent families and always wanders the red-light districts. One day, Ning meets an innocent young lady, Qian (Sabrina Qiu) and falls for her inevitably.

What he doesn’t know is, Qian and her sisters are goblins. They loathe unfaithful men and with the lead of Queen Snow (Lukian Wang), they torture these bad guys. Qian sees through Queen Snow’s wicked scheme and that, all guys lured by the goblins will have their soul sucked away and die. Qian sees Ning as a good man and would hate to see Ning harmed by Queen Snow. Qian then decides to betray Queen Snow and runs away with Ning.

Their affection grows as they pull through all the dangers and adversities on their way to Ning’s hometown. Unexpectedly, Ning’s mother is firmly against their relationship and gangs up with Taoist priest Yan (Liu Tengyuan) to unveil Qian’s true identity, which is quite a shock to Ning.

Ning struggles but only to realize that, regardless of Qian’s identity, she is the one he loves. He decides to fall for Qian again...