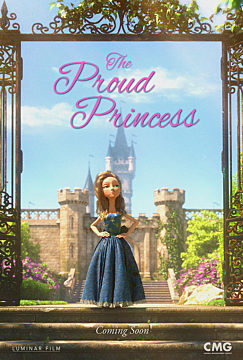 When the King from a neighboring Kingdom is shown a photo of the beautiful Princess, he is determined to have her hand in marriage even though his butler warns him that she is very proud and notoriously arrogant. The butler informs the King that she and her father have been under the control of three sneaky, greedy, Counselors. Destined to meet the Princess, the King overlooks his staﬀ ’s advice and sets forth on demanding an introduction. However, the Counselors have already been planning how to convince the Princess and her father to marry a handsome and uneducated Prince who will help in their agenda to maintain rule over the land and its people. After the King attempts to sway the Princess in his delight, he is ordered to be banished from the kingdom by the Counselors. But the King has a better idea, work in the kingdom for free and undercover as a Gardener with the mission to catch the Princess’s attention. It isn’t long before their paths cross in the garden and he oﬀers her a singing ﬂower that softens her arrogant heart. As she gets closer to the Gardener (the King in hiding) she starts to discover the Counselors evil and trickery plan to control her and her father. After escaping the Kingdom, the proud Princess and her Gardener ﬁnd refuge at a Farmer’s house while the Counselor’s hunt her down. The Princess’s father ﬁnds counsel with the Princess’s retired Nanny as he awakens from the spell the Counselors had him under and demands they all be jailed. Meanwhile, the Gardener (the King) unveils his true identity and the no-longer-too-proud Princess happily takes his hand in reigning her kingdom and living happily ever after.