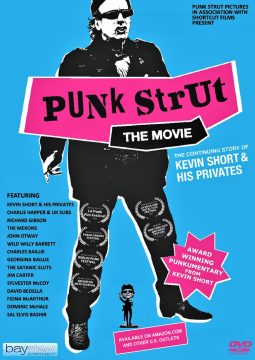 A feature-length tribute to the age and spirit of Punk, which begins as a gentle ramble through the pasture of popular culture and spirals into a story of comic absurdity. 30 years after the release of his cult record 'Punk Strut' Kevin Short has assembled the original musicians to record a new kicking version of the track, and to mark the event, Richard Gibson becomes Rik Shaw once again to present a wild and highly entertaining rockumentary of Kevin Short and His Privates 30th year reunion. In the process, they explore the world of punk today, and meet some of the surviving bands and fans. Mixing documentary, music, and fiction, the film also looks at the reality of punks approaching their sixties. It is available to stream on Amazon and various sites, and on DVD. Distributed by Bayview Entertainment.