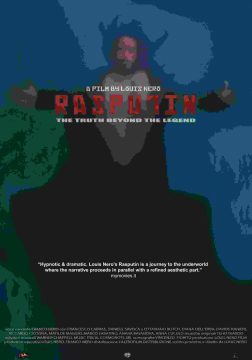 Rasputin was one of the most enigmatic and controversial characters of the 20th century. Born a peasant, he became the adviser to the last Tsar of Russia, Nicholas II. He was both hated and feared in governmental circles because of the hypnotic influence he had on the imperial couple. With his striking aura, he was able to seduce both ladies-in-waiting and common women. He was particularly cherished by the Tsarina Alexandra Fedorovna for using his healing powers to save the life of her son, the heir to the throne of Prince Aleksej. On the 19th of December 1916, during the last winter of the Romanov Empire, some of the most influential and notorious characters at the Tsarist court were conspiring against the most mysterious man in Russia.

“Hypnotic & dramatic. Louis Nero's Rasputin is a journey to the underworld where the narrative proceeds in parallel with a refined aesthetic part.” - MyMovies.it