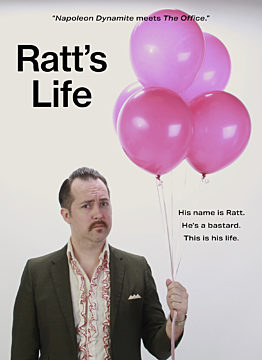 With two weeks left to live, ANTHONY "RATT" BASTID hires a camera crew to document his life story. Diagnosed with a terminal illness, he teams up with a sleazy lawyer to sue his doctor, all while trying to start a family. What results is a comic (and sometimes tragic) portrait of a true rat bastard.

Ratt's Life is shot in a documentary style similar to The Office. Ratt lives in a trailer park and is the walking definition of a rat bastard, even though he views himself as a distinguished gentleman. He is a charming rogue and spins an engaging tale, setting down his life story for the cameras. He has been diagnosed with lung cancer, due to a misadventure with some uranium smugglers. As we get to know Ratt and his world, we set up our major characters, show Ratt’s contentious dynamic with women, and learn how he became the man he is today.

Ratt has an appointment with the lovably inept DR. FINKEL where he learns that he has breast cancer, not lung cancer. Dr. Finkel outlines Ratt’s prospects as “soul-crushingly bleak”. Ratt teams up with his villainous attorney / mentor LANCE "THE IMPALER" HAMLIN, the epitome of a blood-sucking lawyer. They attempt to sue Dr. Finkel for malpractice while Ratt scrambles to “spread his seed” and find the cure to breast cancer. Lance drags Ratt into the criminal underworld where they encounter drug dealers, organ thieves, and run afoul of the DEA.

Along his journey, Ratt finds out who his true friends and enemies are. He has to deal with the effects of his bad behavior and try to patch up relationships with the women in his life. He doesn’t undergo a full metamorphosis, but is less of a bastard by the story's end. We finish on a hopeful note with news that Ratt’s cancer is in remission and that he may have a child on the way...

ANTHONY “RATT” BASTID. Orphaned at a young age and raised in a trailer park, Ratt embodies the characteristics of a rat bastard. He blames most of his problems on bad luck when in reality they are self-inflicted. A loveable rogue, he has a tender side hidden under his gruff exterior. When faced with his own mortality, he responds in inane and comedic ways.

DR. FREDERICK FINKEL. A kind but incompetent doctor who diagnoses Ratt with two different kinds of cancers. He is the catalyst and herald figure that sends Ratt on his journey. Despite his flaws, he actually cares about Ratt and will eventually provide him with the figurative medicine he needs to complete his arc.

LANCE “THE IMPALER” HAMLIN. A sleazy TV lawyer who serves as both mentor and antagonist. Lance, once a hotshot attorney, is now a narcissistic drug addict and all-around bad dude. Ratt views Lance as a father figure and is easily conned into an ill-conceived plot to frame Dr. Finkel for malpractice.

JANET. Ratt’s on-again-off-again love interest. She has Jersey Shore looks, a sweet vulnerability, and a fiery temper. “A sexy hellcat” is how Ratt would describe her. They bring out the best and worst in each other.