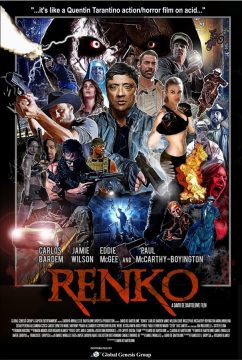 Renko is like an action/horror movie from Quentin Tarantino on acid with visual storytelling reminiscent of Guillermo del Toro’s films. In Renko, veteran Spanish Secret Service agent Adán Rutz (Carlos Bardem) hunts for a violent British psychopath at an adventure park in the mountains of Madrid. It is at the park where the ancient evil spirit of Renko rises to kill all who cross his path. Renko, an unstoppable force unleashed from hell, will spread terror and spill blood as his homicidal rampage rages unchecked. This is a love letter to the 70’s & 80’s action horror films. Renko pays homage to such films as Friday the 13th, Halloween, Indiana Jones and Predator.