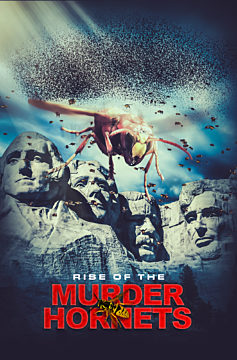 Rise of the Murder Hornets

LOGLINE: A strain of Asian super-hornets threaten to decimate the U.S. population and bring about World War III.

Rise of the Murder Hornets is an epic sci-fi adventure. Beginning in rural America with a small-town attack, the mutated hornet swarm quickly balloons in size and the stakes grow with it. From a besieged elementary school to a high-tech science lab to a dizzying climax at Mount Rushmore, we join a scientist, teacher, and student as they race to save everyone and everything they love.

Thrilling, suspenseful, and breathlessly paced, Rise of the Murder Hornets is inspired by Michael Crichton and Stephen Spielberg, by movies like Jurassic Park and Jaws, where ordinary people are thrown into extraordinary circumstances.

A family of four is found stung to death in Mitchell, South Dakota — the heart of bee country. The local Sheriff calls in an apiologist — LUKE (30’s) — who is studying declining bee populations in the area.

Upon autopsy, Luke finds an Asian “murder hornet” in the father’s stomach. But how did it reach America? Just then, he and the Sheriff learn that a swarm of murder hornets has attacked a local elementary school.

At the school, REBECCA (30) and her students barricade their classroom, but three hornets get in. Rebecca stomps one hornet and MARTIN (10) traps another one inside a lunchbox. Before they can kill the third hornet, it stings Rebecca several times and she falls unconscious.

Luke and the Sheriff arrive at the school to find everything in chaos. A hornet swarm kills the Sheriff. Luke rescues Rebecca and Martin and speeds off to his lab. He and his research team revive Rebecca and use the captured hornet to synthesize a pheromone-based camouflage.

Meanwhile, a FEMA crisis team led by warhawk GENERAL THORNE (50) plans to gas bomb all the affected cities in the US. When it is discovered that the hornets hatched from imported Chinese drywall, Thorne uses it as an excuse to push for World War III.

A hornet swarm attacks and destroys Luke’s lab. Everyone is killed except Luke, Martin, and Rebecca -– who try to escape in a hot air balloon. An explosion knocks Luke and Martin from the balloon, leaving Rebecca trapped inside.

Luke and Martin follow the balloon to nearby Mount Rushmore, where the hornets are building a huge nest. Luke and Martin rush to save Rebecca before gas bombs are dropped on the national landmark and all hell breaks loose...

LUKE CARVER, 32. A dashing apiologist. While looking into declining bee populations, he discovers a much more imminent threat — a new strain of giant murder hornets. Cool under pressure and confident in himself, he finds a love interest in Rebecca. Dream Cast: Michael B. Jordan, Dev Patel.

REBECCA EVANS, 28. Small-town schoolteacher. Loves her job and the kids she teaches. Takes decisive action when a hornet swarm invades her school, putting the children’s safety above her own. Thrown into a dangerous quest with Luke, whom she soon develops feelings for. Goes through a gauntlet of trials and is often in peril, but never powerless. Dream Cast: Ana De Armas, Naomi Scott.

MARTIN, 10. Precocious star pupil with a crush on his teacher, Rebecca. He’s a good student with a moral code, but he’s no kiss-up. Considers himself a protector to Rebecca. Shows plucky courage while accompanying the woman he loves on a daring and exciting adventure. Distrustful of Luke, whom he sees as a rival for Rebecca. Dream Cast: Archie Yates, Iain Armitage.

GENERAL THORNE, 50. Hard-ass military man who sees the murder hornet invasion as an excuse to start World War 3. His solution for any problem is to blow it up. A charismatic and fun character, despite his villainous tendencies. Dream Cast: Keith David, Stephen Lang, Gary Cole, J.K. Simmons.

BARLOWE, 40. Head of FEMA and liaison to the President. At odds with General Thorne most of the time. Advises restraint in the face of catastrophe, despite increasingly staggering odds. Dream Cast: Zach Woods, Thomas Middleditch, Donald Glover.