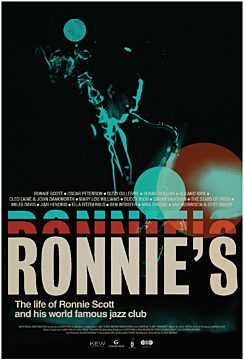 The global musical legacy of Ronnie Scott and his famous jazz club are celebrated in this new feature documentary from filmmaker Oliver Murray (The Quiet One). Featuring evocative unseen archive, standout live performances and interviews with music industry legends including Quincy Jones and Sonny Rollins, the film shines a light on the world-famous club’s 60 year history and the uncompromising people who made it into an institution.

Revered tenor saxophonist Ronnie Scott founded the club in London’s Soho with fellow musician and business partner Peter King. They were inspired by the vibrant post-war jazz venues they discovered on New York’s 52nd Street. Since then, Ronnie Scott’s Club has played host to the world’s greatest jazz legends, including Chet Baker, Miles Davis, Ella Fitzgerald, Van Morrison, Buddy Rich and Nina Simone. The venue has also hosted superstars from other genres, including Jimi Hendrix – his last performance before
his death – and Lady Gaga.

Ronnie was beloved by many, from the great and famous, to the many hard-up musicians he helped. Ronnie battled with depression and his untimely death in 1996 left the jazz community bereft of a respected leader, but his legacy lives on in the venue which remains firmly on the cutting edge. A Goldfinch Production