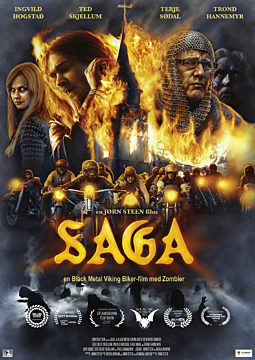 Norwegian Black Metal band Sarke led by no other than Ted Skjellum aka Nocturno Culto (known for playing in Darkthrone and Satyricon) makes the decision to turn their latest music video into a Viking Zombie and Meta Horror Comedy movie in Jørn Steen's directorial feature debut: SAGA.

Roaming on their bikes in the Norwegian countryside, Ted's gang discovers in the ancient norse Saga of the Eyrdwellers, the story of a chieftain who came back from the dead to terrorize the villagers.