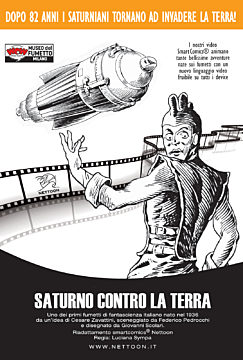 The first Italian space-opera comic series, born in 1936, created by a young Cesare Zavattini, tells about the space war between terrestrials and Saturnians, set in a not - too - distant future where science is strongly present in every human activity. The leader of the Saturnians, the terrible Rebo, attacks the Earth but will be opposed by the inventions made by an Italian scientist called Marcus. The story is full of more and more daring events. We even find the famous lizards on New York many years before the mythical Japanese Godzil­la. Despite its almost ninety years, this story is still able to exci­te with its fantastic world of gigantic animals, powerful funnels swallowing airplanes, revitalizing energy flows and many other exciting events.The first two video episodes come from the first 30 comic-pa­ges and are accompanied by a wonderful soundtrack and an unreleased song dedicated to Rebo