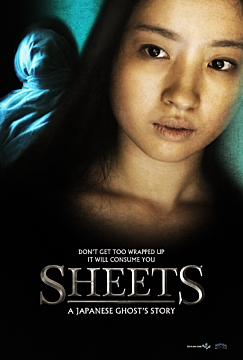 Don't get too wrapped up. It will consume you.

Americans Tyler and Ryan are in Japan for a change of scenery to help Tyler get over his drama with women and make him stop pining over ghosts from girlfriends past but quickly find themselves stranded without money. When they are seduced by a Chinese woman to help her renovate an old Japanese house for free room and board, they unwittingly break a binding spell and unleash a box of angry Ittan-momen; ancient Japanese cotton creatures, that slowly start to hunt them down. Connected to the creatures is the ghost of a beautiful Japanese girl, whom only Tyler can see, and while he falls in love with her, Ryan thinks she is one of the killer sheets.

"SHEETS: A JAPANESE GHOST’S STORY" has the perfect blend of Japanese folklore and Western mentality. It's a romantic horror-comedy that explores the legends of the classic Japanese Yokai: the Ittan-Momen, a Japanese cotton monster.